Today we celebrate the 278th birthday of Deliverance Barrows Ruggles. Thomas Ruggles’ mother must have been quite a woman. She married Captain Nathaniel Ruggles in 1752 and had eight children, seven who lived to maturity. Her husband died in December 1776, just as the Revolutionary War broke out, leaving her with five sons and two daughters ranging in age from 21 to 4. Thomas was only six years old at the time. Her oldest son Nathaniel Jr. settled in Newport Rhode Island and became a successful merchant. Elisha remained in Rochester, Massachusetts and served in the state legislature.

This portrait is believed to be Deliverance. It was the only oil painting in the house when Lizzie died and the manner of dress would be appropriate to the age and time period for Thomas’ mother. When you see the picture in person, you can’t help notice how her eyes follow you all over the room. You have to believe that no one ever gave Grandma Ruggles any guff.

>Today is the 211th  birthday of Frederick Augustus Ruggles. Born January 8, 1801, Frederick was the third son and third child of Thomas and Ruth Ruggles. He was born in Columbia (now Columbia Falls) in the first house the family owned in town. He would have moved into the “new” house- the one we know as The Ruggles House– with his 6 brothers and sisters at the age of 19.

Frederick was a farmer and the agricultural census data from 1850 shows him owning 15 improved acres and 35 unimproved acres. That year he produced 23 pounds of wool, 3 bushels of peas & beans, 220 bushels of potatoes, 220 pounds of butter ﻿and 12 tons of hay.
Frederick and his brother George had jointly inherited a property called the “Patten Farm”, but he apparently lived in the Ruggles House with his mother and sister Lucy. After Ruth Ruggles’ death, in 1859, Lucy and Frederick shared ownership of the house. Each owned half of the house and had joint ownership of the front door and staircase. Eventually Frederick acquired the whole house.

In 1847 Frederick married Caroline Stone Bucknam, a local girl 12 years his junior. They had two daughters, Emily, born in 1850 and Lizzie born in 1852. 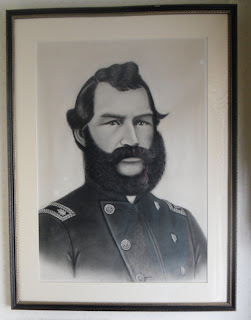 This picture of Frederick in his militia uniform is a charcoal drawing done by one of his daughters.